The route 197 began many years before May 1948, previously before this month the route was operated by ST Type, but now it was operated by RT type buses. The route was operated from South Croydon Garage (TC), and provided a service between Norwood Junction to Caterham Valley via Woodside, East Croydon, South Croydon, Purley, Kenley and Whyteleafe. The current PVR was Monday to Friday 22RT, Saturday 41RT and Sunday 28RT. There was any change for at least 15 years until the 1st September 1964 as the Sunday operation was converted to Routemaster type (RM) buses. There was a slight reduction in the number of buses allocated to the route as well on this date. The current PVR was Monday to Saturday 17RT and Sunday 8RM. By the 11th November 1967 the RM type buses were replaced by the RML type, this was only on Sunday’s. The current PVR was Monday to Saturday 17RT and Sunday 6RML.

On the 9th August 1986 London Buses lost the route to London and Country and they operated the route from (CY). The route was also withdrawn between Croydon and Caterham and this section was replaced by route 197A and 197B. The 197 now only ran Monday to Saturday. The route was very short now Croydon Catherine Street to Norwood Junction. By the 27th June 1987 the evening and early morning Saturday service was withdrawn and not many people were using the route.

On the 3rd September 2005 the contract was revised for the 197 and Arriva London still had the contract. There was a major change to the route as it was extended from Norwood Junction to Peckham Bus Station via Croydon, Woodside, Norwood Junction, Anerley, Penge, Forest Hill, Dulwich and Peckham Rye. This replaced the withdrawn section of the 312. The current PVR was Monday to Friday 16LFDD, Saturday 14LFDD and Sunday 8LFDD. The average frequency is every 12 minutes Monday to Saturday, Sundays and evenings every 20 minutes. The average journey time is between 40 and 70 minutes. 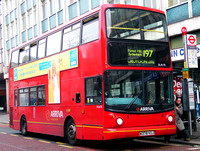 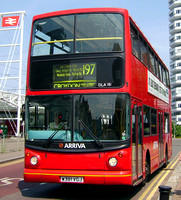 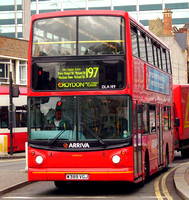