The 402 is the closest route in current operation to any of the original and extensive network of cross border services operated by London Country. The route is basically in its original state with very little diversions been made sinces its introduction. Most cross border routes nowadays have been restricted so that they only venture a short distance beyond the border on one side or the other. The 402 has had a diversion, however this is generally short compared to the lost sections of the other cross border London Country routes. For many years the route was only operated between Bromley and Tonbridge, and had also originally operated directly via Polhill rather than the diversion that it now sees via Halstead and Knockholt. This presumably was to help the routes patronage, which has been dangerously low in recent years.

The 402 was completely withdrawn in 1980, and coach route 706 operated by Green Line replaced it, with local route 431 covering most of the 402's requirements via Badgers Mount. However, the 706 and 431 were withdrawn themselves in 1987, when Kentish Bus upgraded and modernised their network of services. Out of this came Route 22, which follows the same route as the 402 does today and differing from the original 402 by diverting via Weald and Knockholt Pound.

The route was renumbered 402 again in 1990 as passengers were not happy with 'Route 22' and found services confusing, the route was also cut back to only Sevenoaks. Tonbridge being reinstated to the route in 1992 along with an extension to Tunbridge Wells. The route was close to 2 hours end to end. In June 1997, the route was relaunched in an attempt to raise awareness of the service and increase ridership. The route was allocated Olympians and the route was transferred within the newly formed Cowie to Maidstone and District's Tunbridge Wells garage. Evening and Sunday services that were operated by London Transport and only ran between Pratt's Bottom and Bromley, remained at the routes initial and traditional home of Dunton Green, as shared with Bromley route 320. Dunton Green had closed in November and the Evening and Sundays services did not last much longer. The small batch of allocated Olympians recieved a special livery for out-of-London based Arriva vehicles. Red with a cream sweep at the front upper deck, unusual as all other out-of-London Arriva vehicles were Turquoise and Cream. Red was prefered as it reflected the route's venture into London areas, although long before the strictness of TfLs rules of red liveries now. The Olympians were latter replaced with DAF double deckers (Palatines), which were new in 1998. The DAFs were shortlived on the route as 1998 step-entrance buses, as briefily after their introduction TfL had brought in a strict Low Floor rule on all Greater London area services. Transport for London's desire to make all routes with low floor vehicles meant that the DAF double deckers where completely withdrawn from the 402, along with any other step-entrance vehicles that occasionally strayed onto the route. Plaxton Prestige single deckers took over operation of the 402 in 2006 and some carried route branding. They were in the traditional Arriva Turquoise and Cream livery rather than red as the Olympians and a few DAFs had been. The vehicles had come from Arriva in the Gravesend and Dartford areas on routes such as 480 & 490, being new in 1999 they were used for additional services when Bluewater had opened. The introduction of the Fastrack scheme with more new buses, meant the Prestiges became surplus to requirements. In 2008, the 402 took another blow from Transport for London, when they introduced Low Emission Zone. The Prestiges failed to comply with the LEZ, meaning that relatively new vehicles were banned from operating the 402 even though they were low floor. However, Arriva had some surplus Darts from contract renewal of Route 370, so they were transferred onto the 402, close to where they originally started service on the 286. The Route sometimes sees low floor ALX400 double deckers, surplus from route 101 in Maidstone and the rare Enviro Dart from Tunbridge Wells. The 402 is mainly run by red liveried single door Darts with subtleroute branding. From 1st March 2010, Routes 402 and 477 are changed operation from London Local Service Agreement (LLSA) to London Service permit (LSP). Despite the route being an LSP, TfL and Arriva have a seperate agreement that still allows TfL Bus Passes, Travelcards and Oyster Cards. Normal Oyster card holders can pay a cash fare of £1.20 due to a lack of reader machines. Freedom passes and Concessionary passes are now only valid after 09:30 Mondays to Fridays. The route is is currently operated from (TW) Tunbridge Wells garage. The current PVR is 5 with a fixed hourly frequency with no Sunday or late evening services. The average journey time is 85- 134 minutes. 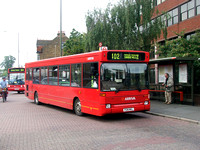