The route 280 began on the 22nd March 1969 and was introduced to replace part of the 80, the route provided a Monday to Saturday service between Tooting Broadway and Belmont Station except from school journeys which carry on running to Walton on the Hill (Via Mitcham, St Helier, Sutton, Brighton Road, New Road, Mere Road and Walton Street). The Route was operated at Sutton Garage by RT type buses. The current PVR was Monday to Friday 11RT and Saturday 14RT. On the 24th January 1970 the school journey route was diverted in Tadworth. On the 5th January 1974 a Sunday service was introduced, the current route was, Monday to Saturday Tooting – Belmont, Sundays Tooting – Banstead Hospital and School Journeys from Tooting to Walton on the Hill. The route was also converted to one person operation. The current PVR was Monday to Friday 11DMS, Saturday 14DMS and Sunday 5DMS. 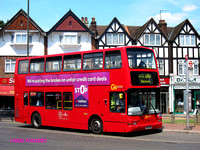