The 417 began in 1999 and was introduced to replace the 137A, the new 417 provided a service between Clapham Common & Crystal Palace (Via Brixton). The contract was awarded to Arriva London South which operated the 417 from their Norwood (N) Base, which had a huge amount of Olympians. The current PVR was 10L Monday to Friday, Saturday 11L and Sunday7L. Throughtout 2003 Arriva gradually converted the 417 to Low Floor Single Deck Operation Using DLA/VLA types. On the 21st August 2004, Arriva retained the contract for the 417 using it’s existing fleet of Low floor deckers. There was a slight frequency increase making the PVR Monday to Friday 12DLA, Saturday 13DLA & Sunday 7DLA.

On the 20th August 2011, Arriva managed to retain the contract again for the 417, being the only operator of the route since it began in 1999. The current PVR is Monday to Friday 11DLA/VLA, Saturday 13DLA/VLA & Sunday 7DLA/VLA.The average journey time is between 25-45 minutes. The frequency of the 417 is, Monday to Saturday every 10-13 minutes, Sunday and evenings are every 15 minutes. 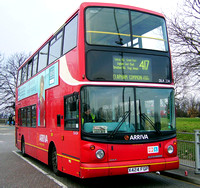