The 249 began on the 25th May 1991 and provided a Monday to Saturday service between Crystal Palace and Tooting Bec Station (via Beulah Hill and Streatham Common). The route was operated at Streatham Garage (AK). The current PVR was Monday to Friday 10DR+1M (349) and Saturday 8DR. On the 14th March 1992, a Sunday service was introduced as the Sunday 349 service was withdrawn. The route Monday to Saturday stayed the same as before but the Sunday service continued on to West Brompton (via Clapham Junction, Battersea Bridge and Chelsea). A Norwood Garage (N) allocation was also introduced on this date and the Streatham allocation was transferred to Brixton (BN). The current PVR was Monday to Friday 2T/349 (BN) 10DR (N), Saturday 9DR (N) and Sunday 13T (BN). On the 24th October 1992 the Sunday service was converted to single deck using DR type buses. The PVR allocations stayed the same. 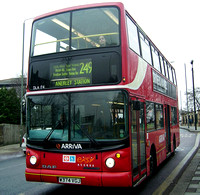