The 194 began before the 20th October 1948, and provided a service between Croydon Airport to Forest Hill, via West Wickham and Penge. The 194 was operated by Elmers End Garage (ED), by RT’s. The PVR was currently Monday to Friday 36RT, Saturday 29RT and Sunday 19RT.

By 1963 the Sunday service was withdrawn and replaced by a re-numbered route 194C, but this was diverted to Shirley Way not Wickham Road. The PVR was currently Monday to Friday 22RT and Saturday 18RT. 7 years in 1970, the Sunday service was back in action for the 194 and the 194C was withdrawn, but a new route was introduced to serve Shirley Way, called the 119B. The 194 was also converted to single deck operation by SMS buses. The PVR was currently 18SMS Monday to Friday, Saturday 12SMS, and Sunday 6SMS. By 1973 the 194 was converted back to double deck operation, by DMS class buses, there was only a very slight change in the amount of vehicles was an increase by 1 bus Monday to Friday.

On the 24th April 1985 the Sunday service was withdrawn again, this was replaced by a new route called the 194A. The 194 was converted to D class buses which were still operating from Elmers End (ED). Monday to Friday PVR was 14D and Saturday 11D.

By 1986 Elmers End Garage (ED) closed and the 194 was transferred to South Croydon Garage (TC), it was converted to single deck operation by LS class buses, Monday to Friday PVR was 14LS and Saturday 11LS. On the 14th March 1992 the contract was transferred to Selkent at Catford Garage (TL). The 194 back to Monday to Sunday operation as the 194A was withdrawn. The 194 was converted back to double deck using Titans. The PVR was currently Monday to Friday 11T, Saturday 13T and Sunday 5T.

In 1996 the 194 was withdrawn between Croydon and Croydon Airport, this meant the 194 was diverted to West Croydon Bus Station. The Withdrawn section was replaced by the 119. There was a lot of changed throughout the year as there was 2 garages operating the route at one point, TB and TL, but Selkent decided just to let TB operate the 194.

On the 30th August 2003 Stagecoach lost the contract to Arriva London South at South Croydon Garage. The 194 was also withdrawn between Bell Green and Forest Hill and was diverted to Sainsbury’s instead. Arriva brought brand new low floor double deckers to operate on the 194 called Dennis Wright buses. The PVR is currently 14DW Monday to Saturday and Sunday 8DW, they also use DLA class buses on the 194 as well.

The average journey time for the 194 is 45 and 72 minutes. The frequency is every 12 minutes Monday to Saturday, Sunday and evenings every 20 minutes. 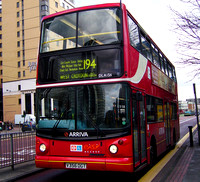