The 201 began on the 17th June 1995 and this route replaced the eastern section of route 200. The route ran from Tulse Hill to Mitcham Cricketers. The 201 was operated from AL which was owned by London General and they used Dennis Darts for the route. The PVR was 6PDL Monday to Saturday and Sunday 4PDL.

5 Years later on the 17th June 2000 and Mitcham Belle won the contract and they operated the 201 from MC which is near Beddington. Mitcham Belle won a lot of contracts for the Mitcham Routes in and around the same few years like the 152, 200, and 127 and years later the 493. The PVR was 8SD Monday to Friday, Saturday 7SD and Sunday 6SD; Mitcham Belle used a variety of buses for the 201, but mainly Dennis Plaxton’s.

During 2004 the 201 was transferred to Centra London as they purchased Mitcham Belle so all the buses were repainted. The PVR still stayed the same.

Later in 2006 Centra went bust so they didn’t bid for any of there routes and the 201 contract was awarded to East Thames Buses and they operated the route from Mandela Way Garage (MA) using DWL buses. The PVR is currently Monday to Friday 9DWL, Saturday 8DWL and Sunday 6DWL.The average journey time is between 39 and 61 minutes. The average frequency is every 15 minutes Monday to Saturday, Sunday every 20 minutes and Evenings every 30 minutes. 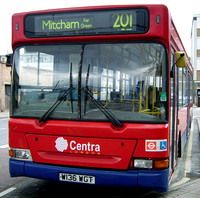