On the 22nd October 1952 the 130 was extended from Croydon to Streatham Common, as this was replacing the withdrawn section of the 166, this section of the 130 only ran Monday to Saturday. Sunday’s it ran between Croydon and New Addington only. The 130 was still operated by RT’s, as the route was extended they had to increase the PVR. Monday to Friday was 27RT and Saturday was 22RT, Sunday stayed the same as the Sunday service didn’t do the extension part of the route.

By May 1953 the route served a full time service to Streatham Common, so the Sunday PVR was increased to 19RT’s. During 1954 the 130 was diverted in Croydon via George Street instead of Katherine Street, the PVR on Sunday’s was decreased by 2 buses. In August 1955 the 130 also had an express operation between E. Croydon and New Addington but this only ran Monday to Friday Peak hour and Saturday shopping hours. A year later the Saturday shopping hours express was withdrawn. In 1957 the terminal changed at Streatham as it used to be Streatham Common but it was changed to Streatham Garage.

In 1963 The express service on the 130 was extended from East Croydon to West Croydon, the PVR of the 130 also changed this year, Monday to Friday was 26RT, Saturday 22RT and Sunday 13RT. During September 1964 it was converted to RM operation which meant another change in the timetable. PVR was now, Monday to Friday 24RM, Saturday still stayed the same at 22RM and Sunday was decreased by 5 buses now it was 8RM. By November 1967 the RM’s were replaced by RML’s. The PVR was increased by 1 bus Monday to Friday and 2 buses on Sunday.

Throughout 1970 there was a lot of changes to the 130, as the Monday to Friday express service was withdrawn and replaced by new routes C1 and C2, this meant a dramatic change to the PVR. Monday to Friday 12RML, Saturday 16ML and Sunday 6RML. Later on in 1970 the Sunday operation was transferred from TC to TH The Sunday service had 6 RM’s on the 130 now. In December 1971 the Sunday service had another bus change, now it was operated by 6RT’s.
In 1975 TC decided to allocate some new buses for the 130 called DM’s. A year on TH changed their Sunday service back to RM’s, but 2 years later TC was back on the 130 full time. So there was a change in the PVR Monday to Saturday 11DM and on Sunday 6DM.
When it came to the end of 1982 TC allocated new DMS’s on the 130. PVR Monday to Friday 18DMS, Saturday 14DMS and Sunday 7DMS, but all the 130’s route was revised.
BRIXTON GARAGE (Suns)Streatham, Streatham Vale, THORNTON HEATH GARAGE (MF except peaks/Sat) - WEST CROYDON (MF peaks) - NEW ADDINGTON
Express Service: NEW ADDINGTON Homestead Way or Salcot Crescent - WEST CROYDON (MF peaks)
Mon-Sat withdrawn between Thornton Heath Garage and Streatham, replaced by new route 60 and further withdrawn MF peaks between West Croydon and Thornton Heath Garage. Express service introduced MF peaks between West Croydon and New Addington Homestead Way serving stops previously used by Route C3.
Sunday service extended from Streatham Garage to Brixton Garage.
During April 1985 Monday to Friday evenings were withdrawn between West Croydon and Thornton Heath. The PVR was decreased by 1 bus on Monday to Friday and Saturday’s by 3 buses. In early 1987 TC converted it to Leyland Olympian operation, but later on in the year there even more changes to the 130.
WEST CROYDON - NEW ADDINGTON Homestead Way or Vulcan Way (MS except evgs)
Express service withdrawn
Withdrawn between West Croydon and Brixton Garage, replaced by Sunday service on Route 60.
Re-routed in New Addington via Field way, Dunley Drive, Headley Drive, Goldcrest Way, King Henry's Drive and Gascooigne Road instead of Lodge lane and Montacute Road.
Mon-Sat (except evenings) additional service introduced between West Croydon Bus Station and NEW ADDINGTON Vulcan Way via above routing to Arnhem Drive and then King Henry's Drive.
Service increase to compensate for 130B withdrawal. This meant more changes to the PVR, Monday to Friday 27L, Saturdays 21L and Sundays 11L. Throughout 1991 T’s, L’s and DMS’s were all allocated to the 130, but a year on the Titan’s (T) were replaced by Metrobuses (M).
In 1993 the 130’s route was from West Croydon to New Addington (Homestead Way). The PVR also changed this year. Monday to Friday 14DD, Saturday 19DD and Sunday 9DD. There was no changes for 7 years until the Croydon Tramlink started, this had an effect on a lot of routes which pass through Croydon.
The Croydon Tramlink had started and the whole of the 130 was revised, it now only ran Monday to Saturday Daytimes, there was a little bit of involvement with Q, as TC was overcrowded. The PVR was now Monday to Friday 6L and NV, Saturday 8L and NV. By 2001 the route was passed to Arriva full time, it was now operated at TC and TH, so Thornton Heath ran an Olympian on the route Monday to Saturday to help out Arriva.
In 2002 TC was running a full time service for the 130 but it was converted to Small Deck. The PVR, Monday to Friday 7LDR/1L and Saturdays 8LDR, so there was only 1 Leyland Olympian running on the 130 now.

In 2003 Arriva had lost the 130 to Metrobus and re-routed the route from New Addington to Norwood Junction, so it didn’t pass through Croydon at all and the Sunday service was back in action, it was operated at Orpington (MB) by darts. The PVR was now 5Dart Monday to Sunday. In early 2006 Metrobus brought a new garage at Croydon (C) so the route was allocated there which it is today. Since May 2010 the 130 has been diverted due to a bridge closure on spring Lane with the 130 diverting through Addiscombe and Morland Road. On the 28th October 2010 metrobus had renewed the contract for the 130 using the existing vehicles. The current PVR is Monday to Saturday 7DT/SLF and Sunday 3DT/SLF. 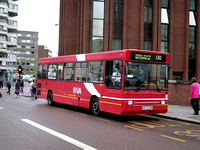 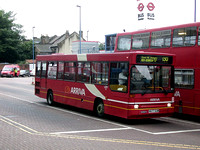